Grace Bahati became a volunteer at His Hands in 2015.  She volunteers as dental assistant, at the front desk and in the medication room. Grace graduate from Kirkwood and is now a student at Mount Mercy studying biology and chemistry in hopes of becoming a dentist.

Dr. Akey introduced Grace to His Hands during a clinical rotation while she was in dental assistant school.  She had heard he volunteered at His Hands and she agreed to come see the clinic.  She was amazed to see others contributing to the welfare of others and not taking credit for it but thanking God for the opportunity to serve.

Grace’s story begins in Rwanda where she was born and then raised by her uncle.  In 2009, at 18 years old, she was crowned Miss Rwanda.  She admits she was surprised that God choose her as she says “there were many beautiful women”.  This title gave her a platform and opportunities, including coming to the United States, which she may not have otherwise had.  At 19 she came to the United States and shortly thereafter became pregnant with her now 5 year old son.  There was much discouragement from others and she began to pray that God would reveal himself.   It was then through the encouragement and prayers of a friend, God did just that.  Grace saw God in this friend, her parents and their kindness.   Her friend’s family and their friends quickly became hers.  Grace says: “God multiplied His blessing connecting strangers to me that soon became family”.

Grace is grateful to this community and His Hands, which provides care to those of all walks of life.  She will tell you that she’s been given a lot and wants to bless as she’s been blessed.  Someday Grace hopes to return to Rwanda to serve as a dentist to those in need and also reconnect with family, overlooking mistakes and difficulties once experienced. 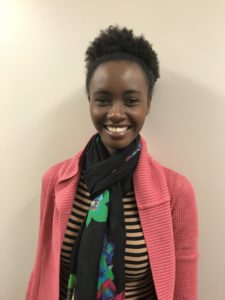 « Laughter is the Best Medicine
See the whole person »

how to reach us

**Priority is given to our patients with appointments.